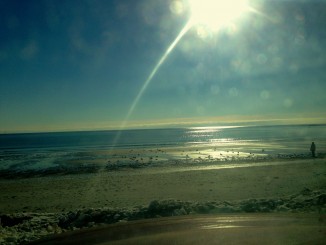 The cataclysmic Uranus Pluto square that caused worldwide upheavals over the past couple of years has ended. Despite the rampant suffering that remains, I’d like to believe we’ve turned the corner into a more positive future.

My own outlook has brightened following a recent discovery. The issue that has devastated me over the past year is geoengineering. Seeing the once blue skies constantly clouded with toxic airplane stripes stripped away all my wonder as I gazed up, and replaced it with anger and a feeling of powerlessness.

I had heard that orgonite neutralized the trails that planes deposited into the skies, but had never used it effectively.

Through the miracle of facebook, I met a man who makes orgonite and told me how to make it work. The sky has a naturally self-cleaning mechanism, but it is disabled by the emanations from cell towers. Orgonite can restore the skies to their rightful clarity if it is placed near cell towers.

I recently participated in one such cell tower “gifting” excursion, and the results were instantly miraculous. The sky over Silver City is blue again. The trails that airplanes leave evaporate quickly instead of clouding the skies and our attitudes.  Silver City only has a few towers, so it was a relatively quick fix. Your area may require a greater effort.

Geoengineering must be stopped, and people need to learn about the environmental devastation that lies in its wake. But it is empowering to know that we can do something about it ourselves while we wait for enough people to mobilize and effectively oppose it.

Orgonite is relatively simple to make, but you can also order it online. You can use it in your home to reduce the electromagnetic toxicity of your WiFi router, microwave and smart meter. It is a palpably uplifting experience to have it around. I surround my chair with it to feel  positive and productive. If you want to gift the cell towers in your area and make it chemtrail free, order or make the towerbusters.