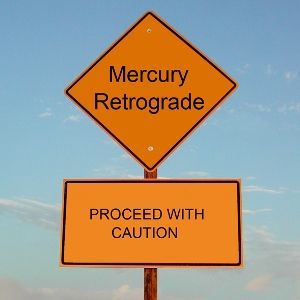 Have you wondered why the simplest things are going wrong these days?

Recently, my dogs’ invisible fence containment system stopped working. After I closed the door to the room that contained its transmitter, I couldn’t open it, even with a key. These back-to-back malfunctions made me wonder whether Mercury was retrograde. Indeed it was.

Yesterday I went into Mexico, charged some items on my credit card with no problem and then had it refused on the basis of attempted fraud the next time I tried to use it. Last night three hours of my blog copy disappeared from the computer before I had the chance to save it. This morning, none of my outgoing mail was saved in the sent folder, despite apple’s promises to do so automatically. I expect this beat to go on for a couple of weeks, so it’s time to breathe deeply.

You may be besieged by minor annoyances such as these from now until June 30, but at least you’ll have a convenient scapegoat.

Mercury rules communication. It goes retrograde three or four times a year for about three weeks. This time, Mercury is retrograde in Gemini, the sign it rules.

What you can do:

Consider each mishap a lesson in humility. Against the backdrop of the life-threatening and chaotic Uranus Pluto square, Mercury retrograde is nothing. But the little things can get to us while the big things may be so inconceivably horrible that we refuse to entertain their validity.